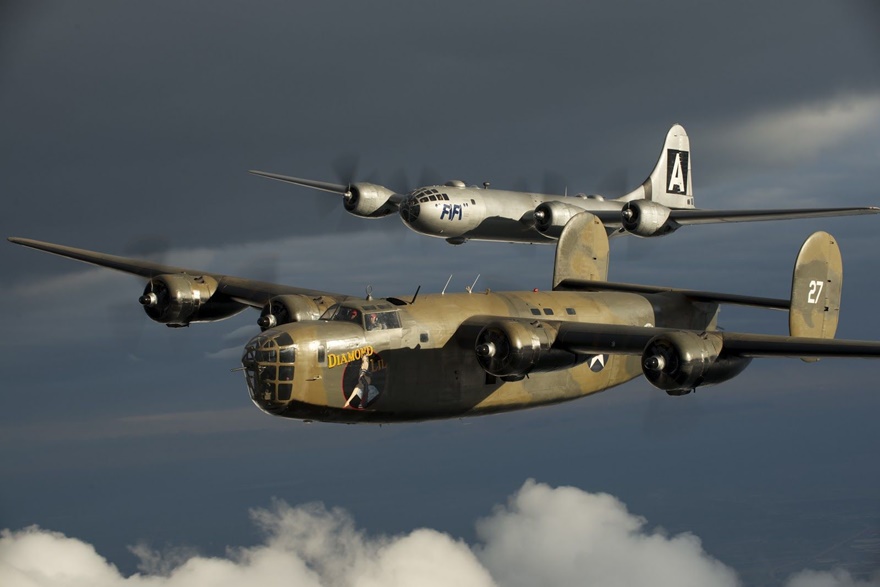 B-29 SUPERFORTRESS “FIFI” and B-24 LIBERATOR“DIAMOND LIL”

to DENTON ENTERPRISE Airport in DENTON, TX FOR PUBLIC TOURS AND RIDES

The sights, sounds, and stories of World War II aviation will come to life in Denton, TX when the B-29Superfortress “FIFI” and the B-24Liberator “Diamond LiL” land at Denton Enterprise Airport,  accompanied by the P-51 Mustang “Gunfighter”,a T-6 Texan, a PT-13 Stearman, a T-34 Mentor, and special guest the L-26B“Ike’s Bird”. The event is presented by the Commemorative Air Force, which brings its AirPower History Tour to airports across North America each year. Visitors will be able to view all aircraft up close, purchase rides, an dtour the B-29 and B-24 cockpits when the aircraft is not flying.

Cockpit tours of the B-29 and B-24 will be available after the planes are finished flying.

The aircraft will be staged at the USTrinity FBO ramp at Denton Enterprise Airport, 5000 Airport Road, Denton TX76207.

Access to the ramp is $20 for adults, $10 for youths age 11 through 17, and free for children age 10 and under. Rides may be booked in advance at AirPowerTour.org where additional information about the event may also be found.

About the CAF B-29 Superfortress FIFI:

The Commemorative Air Force (CAF) acquired FIFI in 1971 when a member found her at the U.S. Navy Proving Ground at China Lake, California. The airplane was rescued and restored by a group of CAF volunteers and has been flying for more than 45 years. Since 1974, FIFI has been traveling coast-to-coast each year honoring the men and women who built, maintained and flew WWII aircraft, and educating the next generation on their service and our history, attracting large crowds at every tour stop.  The Boeing B-29 Superfortress was first flown in 1942. It began active service in the US Army Air Corp in 1944, and is best known as the aircraft whose missions over Japan helped bring an end to World War II. The B-29 also was used in the Korean War in the early 1950s and was a staple of the U.S. Air Force until 1960. Learn more about FIFI and her tour schedule at www.airpowertour.org

ABOUT THE B-24 LIBERATOR “DIAMOND LIL”

The Consolidated B-24 Liberator was the most produced American warplane of WWII with over 18,400 aircraft rolling off assembly lines across the country. Most were manufactured at Ford’s giant Willow Run assembly plant in Detroit. Diamond Lil, one of the first B-24’s produced and still one of only two

B-24’s in the world still flying provides the opportunity to experience the sights and sounds of our fathers and grandfathers in the dangerous air wars over Europe, the Pacific, North Africa and Asia.

ABOUT THE P-51 MUSTANG

The North American P-51D Mustang is one of the most recognizable and loved aircraft in aviation history. With its speed, range, and sleek lines,the P-51 became a favorite of Allied fighter pilots and bomber crews. The long-range fighter aircraft had a range of 1,300 miles that enabled it to accompany the bombers to their targets and back, and it was faster and more maneuverable than its German and Japanese opponents.

ABOUT THE T-6 TEXAN

The North American T-6 Texan, known as the "Pilotmaker”, wasan advanced flight trainer that introduced new pilots to a complex aircraftwith more speed of over 200-plus miles per hour, to prepare them for thewarbirds they would fly in combat in WWII. The T-6 was designed for aninstructor and student, and had a closed cockpit.

ABOUT THE PT-13 STEARMAN

The Boeing PT-13 was the primary flight trainer for all branchesof the military during World War II. This iconic bi-plane, almost universallyknown as the "Stearman”, trained more crews than any other aircraft inWWII. A ride in this open cockpit airplane brings back the wind-in-your hairfeeling of the early days of flying.

ABOUT THE COMMEMORATIVE AIR FORCE:

Through more than six decades of collecting and flying WorldWar II aircraft, the CAF has become the world’s largest flying museum. Their fleetof over 170 World War II airplanes are assigned to unit locations across theU.S. and are supported by 12,000 volunteer members. Nearly all the aircraft arekept in flying condition, enabling people to experience firsthand the sight andsound of vintage military aircraft in flight. The CAF is dedicated to honoringAmerican military aviation through flight, exhibition, education, andremembrance.

We Are Featured On AIN Online

Avfuel State of the Industry